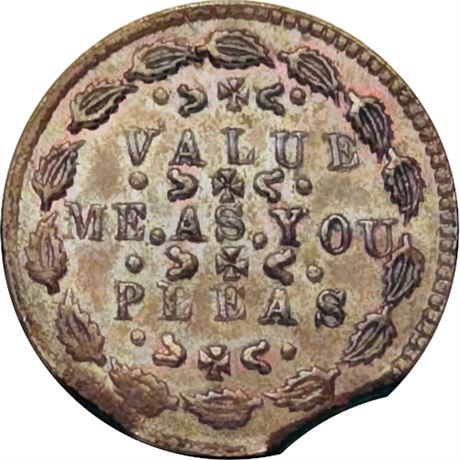 Civil War Patriotic token Fuld 234/431 a R6 NGC AU55 with traces of original red mint luster on each side, a small planchet clip and a few tiny obverse planchet flaws typical of this die sinker. Difficult to photograph and nicer than pictures would indicate. Mishawaka maker Henry Higgins' Indiana Primitive version of Scovill's 233 die, the main difference is that this one is actually labeled Capital spelled incorrectly making it two spelling errors on one token with the addition of Value Me As You Pleas on the reverse. The only Patriotic use of this obverse die. We sold this very example in July 2015 for $200 when it was still Raw and graded EF+, perhaps a bit conservatively.