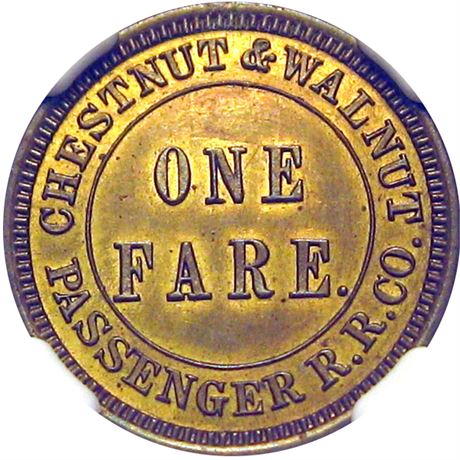 360 - PA750H-1b R8 NGC MS63 Or a bit better with 50% Bright luster. Chestnut & Walnut Passenger Railroad Company One Fare struck in Brass with 1861 dated Benjamin Franklin reverse die 1148. Very rare merchant and likely the finest known, high R8 with at least two example being quite low grade. The current plate token is an AU58 from the Bleviss collection that realized $6,325 in Stack's September 2009 sale. From the Mark Cramer, Steve Tanenbaum, Ray Bryne, Jon Harris and George Fuld collections. In a NGC Tanenbaum holder. The Fuld Plate token in the second edition of the Store Card book. (8000-12000)