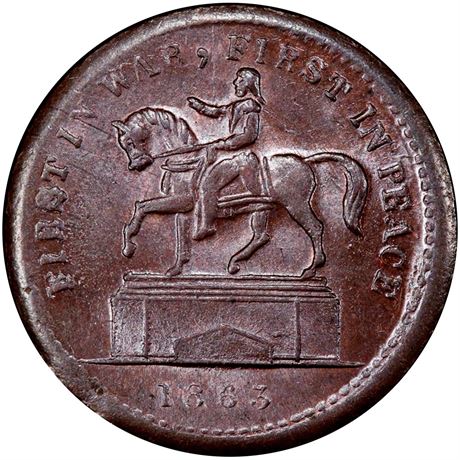 Civil War token Fuld 175/232 a R5 PCGS MS65 BN with great luster and typical weak date for this die combination. First In War First In Peace 1863 Our Country. An Indiana Primitive made by Higgins of Mishawaka Indiana, a token manufacturer and innovator of sorts...he copied the equestrian side from the more commonly seen Scovill die 174 using an ingenious method of creating his own copy die. An NGC MS64 BN sold for $350 in our January 2016 catalog sale. From the Robert Williams collection though not noted on the holder. Robert Williams was a very advance collector of Patriotic Civil War and Hard Times tokens from Florida and should not be confused with the Bob Williams token dealer from Michigan.