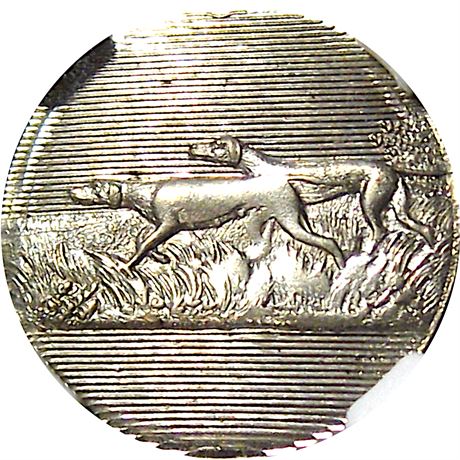 Civil War Token Fuld 184/427 j R8+ NGC MS65 60% or more Bright luster.  Very rare and popular die.  The obverse is the famous Hunting Dogs die, though if might just as well be known as the Running Dogs or even Pointing Dogs.  Either way it is a fascinating die so much so that the late Bret Palser made it literally his calling card.  At the height of its popularity and promotion in 2004 a copper specimen in MS66 RD sold for $20,000. More recently we sold a NGC MS63 example in White Metal for $2,500 on our website in February 2014. From the Tom Reed collection, though not so noted on the holder.