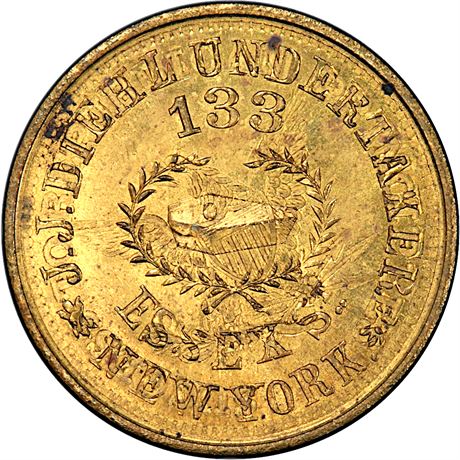 Civil War token Fuld NY630T-1bo R10 PCGS MS64 30% Bright. J.J. Diehl Undertaker 133 Essex St. New York 1863 struck in Brass over an 1860 dated Presidential campaign token for Abraham Lincoln. Known as DeWitt AL 1860-59 it shows palm leaves, an eagle and slogans Millions For Freedom Not One Cent For Slavery and Success To Republican Principles. This die combination has always been popular as it features a coffin, a fairly morbid symbol to use for advertising during a war. From the Q. David Bowers collection, earlier from Rossa and Tanenbaum. In a special PCGS holder with Dave's picture and facsimile signature.