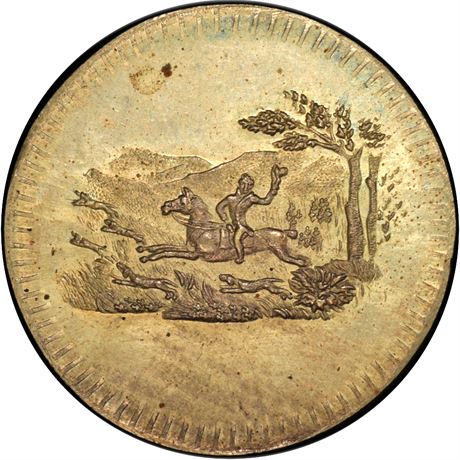 Civil War token Fuld 481/490 j R8 PCGS MS64 40% Bright more so on the obverse. Hunter on horse with hounds running alongside. Hope 1844 with an anchor on reverse stuck in German Silver. This series of tokens was made during the Civil War in late 1864 or early 1865 for the Rhode Island Numismatic Society and once again been included in the current edition of the Patriotic book. We sold a PCGS MS62 example in White Metal for $898.88 on eBay in March 2020. From the Dave Bowers and George Fuld collections, earlier us via Want List. In a special PCGS holder with Dave's picture and facsimile signature.