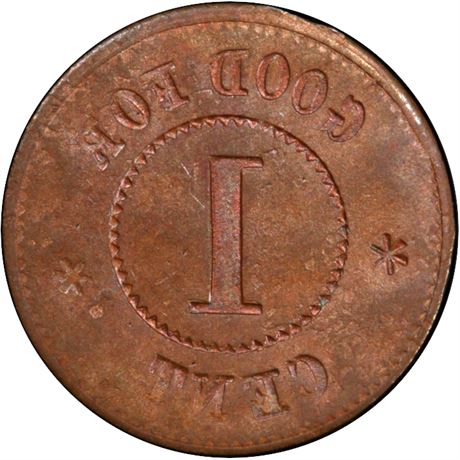 Civil War token Fuld 393/393 a R9 PCGS MS65 BN 10% Red all on the struck side. Good For 1 Cent.  From the Steve Tanenbaum collection earlier World Exonumia's (Rich Hartzog) June 1977 sale, though not noted on the PCGS holder. We sold a NGC AU58 for $565.55 on eBay in June 2020. Brockage errors were an important sub specialty in Steve Tanenbaum's huge collection. While most are now long dispersed this is one of the few we still have from his great collection. It along with a few other were recently sent in for grading. A brockage is created when a struck token adheres to one of the dies and in effect becomes a die itself. The next blank planchet struck receives an incused image of the stuck token in addition to the normal die. The first few tokens struck in that manner will receive a crisp sharp strike as in this example but later will become weaker and more distorted.