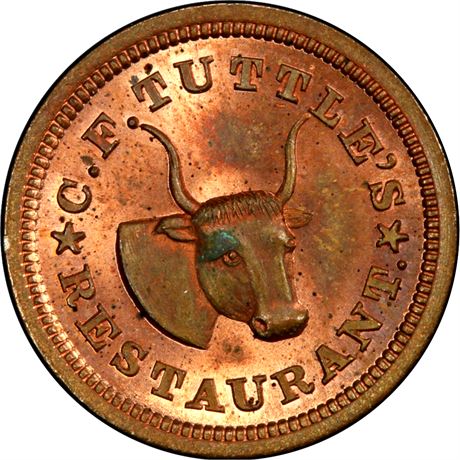 Civil War token Fuld MA115G-1a R6 PCGS MS64 RB with 70% Red and fiery cartwheel luster. C.. F. Tuttle's Restaurant 130 Washington St. Boston Good For 5 Cents In Refreshments. The cow's expression appears sad - perhaps he had a look at the dinner menu. The dies were made by Merriam and he used a composite die for the reverse with the center portion interchangeable with the different denominations, an early innovation later used widely with the Brunswick Balke Collendar pieces of the 1880's and 1890's. We sold a Raw MS63 that was not quite as red but still very lustrous for $800 in our February 2014 catalog sale. From the Dave Bowers collection, in a special PCGS holder with Dave Bowers picture and facsimile signature.