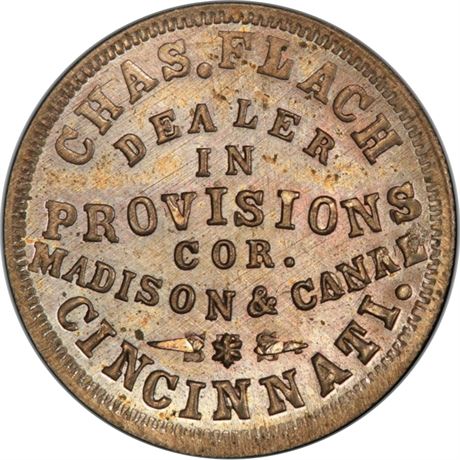 Civil War token Fuld OH165AW-8d R10 PCGS MS63 with 50% original bright luster, obverse is very attractive with some light spotting on the reverse but without the struck through grease flaw in the reverse feathers that is often seen on many of the Unique 1069 Copper Nickel tokens. Charles Flach Dealer In Provisions, Cincinnati Ohio stuck in Copper Nickel with Prairie Flower Indian Princess reverse die 1069. Civil War tokens are one of the few areas of collecting where one can purchase an item that is truly unique for a reasonable amount. The late Steve Tanenbaum had an interesting theory on the mintage of Copper Nickel tokens struck by John Stanton. He felt the mintage was just one for the Copper Nickel tokens with the 1069 Prairie Flower reverse and two for those with the 1864 dated 1047 Indian Head reverse. His evidence was that not more than one 1069 variety and not more than two 1047 variety in Copper Nickel are currently known. Additionally, he had a single second example of 1069, but it had been over struck with 1047 meaning that either the manufacturer or the purchaser noticed the error and had it corrected. From the Q. David Bowers collection earlier from Rossa & Tanenbaum, in a special PCGS holder with Dave's picture and facsimile signature.