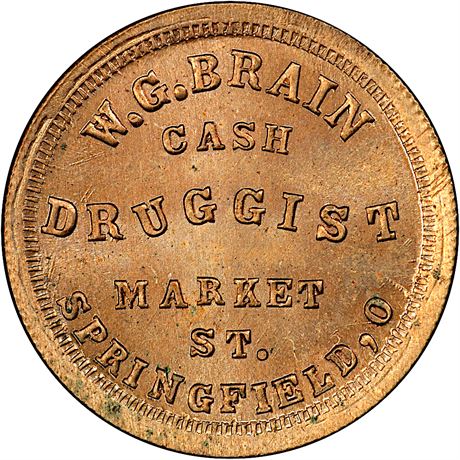 Civil War token Fuld OH830A-12d R10 PCGS MS64 40% original bright luster great cartwheel luster and a very small struck through grease flaw in the reverse feathers. Oddly many of the Unique 1069 Copper Nickel tokens have this feature to varying degrees confirming they were all made during the same time period, likely one after the other. Much like studying die states, one could likely determine the order of striking possibly down to token by token. Such a study, if one had the patience and financial resources, might reveal interesting facts like the manor in which the actual dies were likely stored: alphabetically by merchant, by state, by town, by date of original die manufacture, etc.. W. G. Brain Cash Druggist, Springfield Ohio 1863 stuck in Copper Nickel with Prairie Flower Indian Princess reverse die 1069. Civil War tokens are one of the few areas of collecting where one can purchase an item that is truly unique for a reasonable amount. The late Steve Tanenbaum had an interesting theory on the mintage of Copper Nickel tokens struck by John Stanton. He felt the mintage was just one for the Copper Nickel tokens with the 1069 Prairie Flower reverse and two for those with the 1864 dated 1047 Indian Head reverse. His evidence was that not more than one 1069 variety and not more than two 1047 variety in Copper Nickel are currently known. Additionally, he had a single second example of 1069, but it had been over struck with 1047 meaning that either the manufacturer or the purchaser noticed the error and had it corrected. From the Q. David Bowers, Arthur Fritz and George Fuld collections, in a special PCGS holder with Dave's picture and facsimile signature.