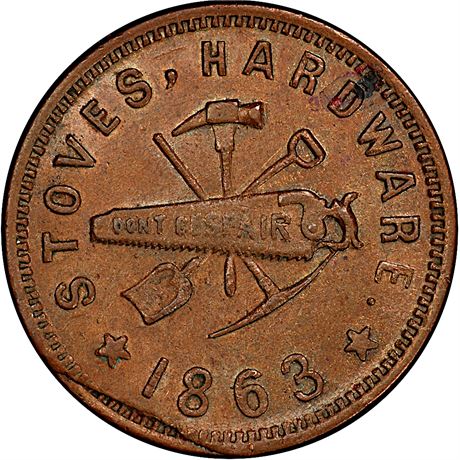 Civil War token Fuld WI510 L-3a1 R9 Raw PCGS MS64 BN. Wm. Frankfurth, Milwaukee Wisconsin Stoves Hardware 1863 Don't Despair with Reeded edge. Rare custom reverse die with larger tools and Pick instead of an Axe as seen on the common die. Every example we have seen have had the same die defect at 6 to 7 o'clock likely accounting for its rarity. Rare and important, we sold a Raw VF+ in our December 2017 realized $354. Though a bit overrated at R9 this is likely the finest know and the only Uncirculated example we have seen offered, the Tanenbaum specimen was NGC AU58. From the Q. David Bowers and Benj Fauver collections earlier from us via want list in a special PCGS holder with Dave's picture and facsimile signature though called in error WI510L-1a1.