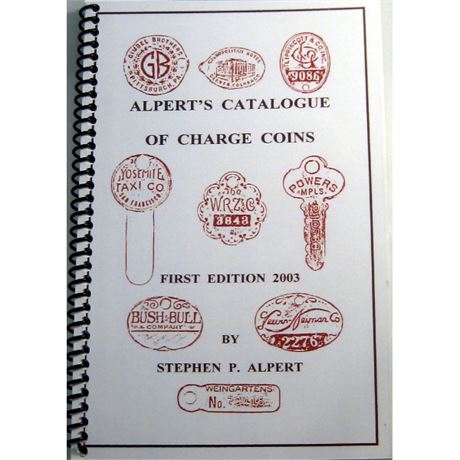 This is my last copy, one of the original first printings and it is used with collector notes.

The book Alpert's Catalogue of Charge Coins First Edition 2003 by Stephen P. Alpert 90 pages spiral bound soft cover. All of Steve Alpert's remaining copies were sold so fast we had to schedule a 100 copy second printing they are very nice with a slightly different spiral binding. Listings are by city and state including price and rarity information. There is a useful master index by issuer as well as Maverick listings.

Charge Coins were the forerunners of our current Credit Cards and were issued by department stores and other retail and service businesses beginning in the late 19th century. The typical example will have the customer's credit account number on one side and a business logo on the other. They were frequently issued holed to facilitate attachment to a key ring, fob or necklace. They were issued for a wide range of business types. Aside from the normal Department Store many were issued for clothing, shoe and jewelry stores. Others were issued by taxicabs, hotels, restaurants, nightclubs and car rentals. Though Pennsylvania issues are the most numerous follow distantly by New York, many other geographical areas used these coins. This book lists additional pieces from California, Colorado, Delaware, Georgia, Illinois, Maryland, Massachusetts, Michigan, Minnesota, Missouri, New Jersey, Ohio, Rhode Island, Texas, Wisconsin and the District of Columbia along with a number of others states represented by just one or two examples. Odd shapes are almost the norm and while many are oval others have fancy flourished added to a basic shape and still others are figural in nature in forms such as shirts, coats, hats, keys, shoes, etc.