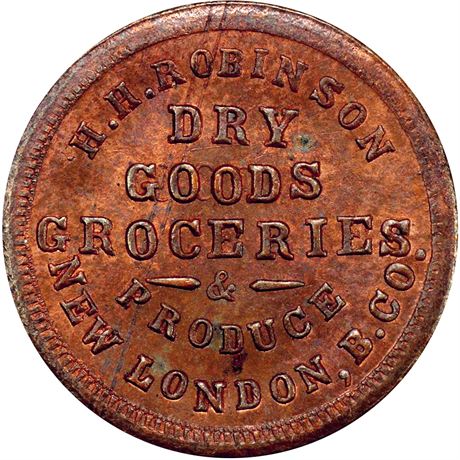 259 - OH620A-11a R9 PCGS MS64 RB 30% Red mostly on the reverse. H. H. Robinson Dry Goods, Groceries & Produce, New London Ohio 1863 within Wreath. The obverse has the same undulating surface referenced in connection with OH165BT-12ao and interestingly with the same reverse die. This type of surface is normally seen on genuine single die doubleheaders. Study reveals no undertype on either the obverse or reverse, though this merchant has one variety with a blank reverse with rim and denticles and perhaps that is what it is struck over. From the Dave Bowers, Urban Rudner and Virgil Brand collections from Rossa & Tanenbaum, in one of Dave's special holders with picture and facsimile signature. (300-400)