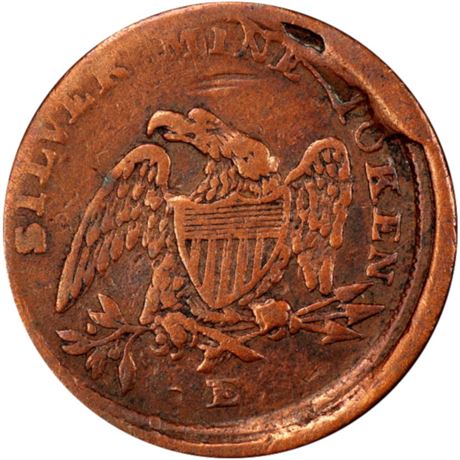 89 - IL150BB-6a R10 PCGS VF Details Cleaned. An unnatural red orange color but no noticeable hairlines. J. F. Siehler German Guest and Boarding House, Chicago with legends in German on the obverse and Silver Mine Token on the reverse. The reverse is signed E thought to be the mark of primitive Chicago die sinker August Escherich. Aside from being Unique this token is highly desirable because it appears to be the only circulating strike of the Silver Mine Token in either the Store Card or Patriotic series. Every other use of this die is Uncirculated and seems intended for the collector market. Nearly all have a large die rim cud that cover, partially or completely, a number of letters. The lone exception is the Patriotic die combination 287/520 offered elsewhere in this sale. This example of the die has the earliest die state seen other than the 287/520 which also appears to be a collector strike. Still the cracks and smaller cud are significant. Long one of our favorite tokens in the Tanenbaum collection. From the Dave Bowers and Steve Tanenbaum collections, in one of Dave's special holders with picture and facsimile signature. (1500-2000)