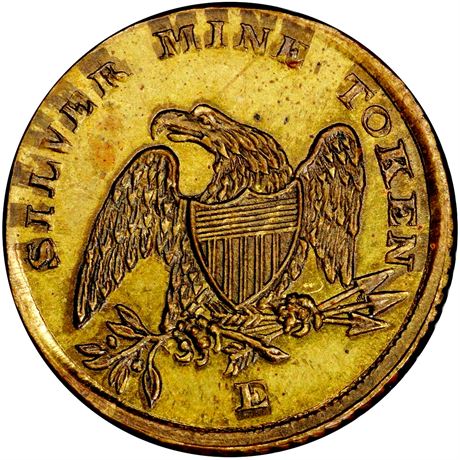 61 - 287/520 b R9 PCGS MS63 30% Bright, very well struck and early die state. Silver Mine Token with 1860 Capped Bust Liberty struck in Brass. Both dies are attributed to die sinker Escherich of Chicago. His dies are often crudely struck. This is the current Fuld plate for 520 die which is normally seen well worn with problems. This example is head and shoulders above any others we have seen from any combination. While die 287, when seen, is usually high grade, it also almost invariably has a large cud at the upper right that completely or partially obliterates three or four letters. We sold a Raw MS63 example of 287/417 d in our July 2007 sale that brought $4,408.54. From the Dave Bowers, Steve Tanenbaum, Larkin Wilson and George Fuld collections, earlier from Bowers and Merena's November 1995 sale. (4000-6000)