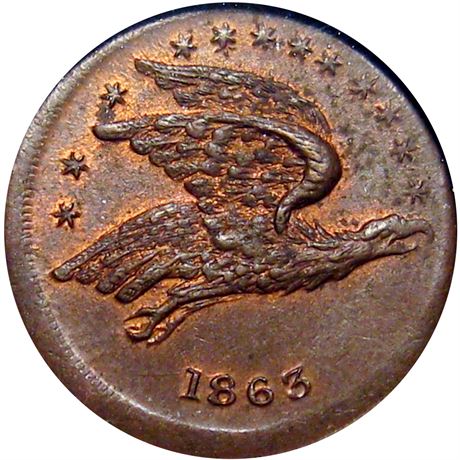 29 - 156/519C a R9 NGC MS65 BN 10% Red all on the obverse. 1863 Flying Eagle with a most peculiar blank reverse die with a raised circle in the center. The obverse die alone is rare in the Patriotic series, particularly this nice. Seemingly a mint error but a real puzzler. Perhaps the other die was in the press upside down or is an impression of the area meant to seat the other die. The truth is likely something far different but hard to imagine. One would also assume this type of an oddity would be unique, but this is the finer of two known with the exact same reverse markings. We sold the other known example, an NGC MS64 RB, in our January 2015 sale where it brought $1,925. From the Mark Glazer, Larkin Wilson and George Fuld collections. (2000-3000)