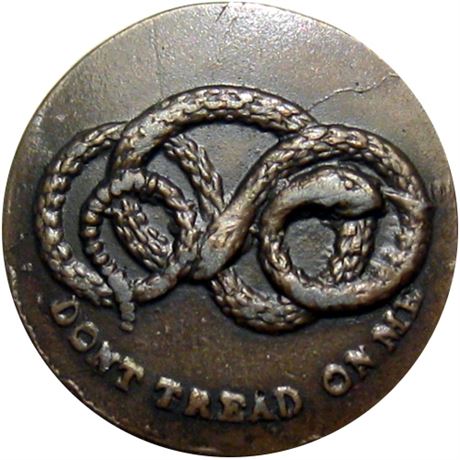 49 - 115/530 g R8 Raw AU With nearly full original Copper plating. George Washington Don't Tread On Me reverse die with oddly coiled snake. Struck in Lead with Copper plating as usually seen on pieces above VF. This example and 115A/530 were likely made by a different die sinker using the Lovett obverse die (115 and 115A) as patterns (similar to Higgins of Indiana Primitive fame). They have again been listed in the new Patriotic book. We sold a similar example that brought $913 in our April 2000 auction. From the Dave Bowers collection. Data: 170°, 82 grains, 20.5 mm. (1000-1500)